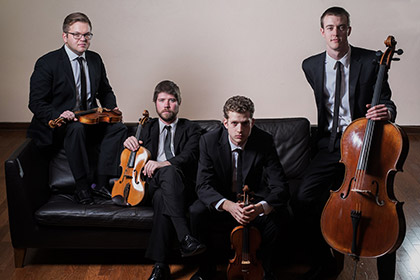 They’re at it again! The Altius Quartet likes Michael Abels’ Delights and Dances so much that, last summer, they performed it at the Music in the Mountains Festival in Durango, CO. This sea

son, they’re performing it again on March 12, as part of their Graduate String Quartet Residency at the University of Colorado-Boulder. Music director Gary Lewis leads the quartet and the University Chamber Orchestra. “It’s exciting to have the Altius Quartet perform my music,” composer Michael Abels shares. “One of my primary artistic goals is to write music that musicians love to play. Having such a dynamic group as Altius championing a piece I’ve written tells me they feel a connection to this music. That’s very gratifying for a composer.”

Delights and Dances was commissioned by the Sphinx Organization for the 10th anniversary of its Sphinx Competition. Sphinx’s mission promotes the works of Black and Latino composers; and, Abels himself is a Sphinx composer. Originally scored for full orchestra with a varied group of string soloists, Abels later revised the 12-minute, three-movement piece for string orchestra and string quartet. This revised version premiered in 2007 as part of the Sphinx Laureates Concert featured at Carnegie Hall.

“The Altius Quartet is joining the University of Colorado Chamber Orchestra for the upcoming concert, serving both as principal players in the orchestra, and as featured soloists on the Abels’ work. When I asked for repertoire suggestions for this program, members of the quartet suggested Delights and Dances. I found the work to be engaging and exciting, and was happy to include it on the program. It has come together quickly…and is a project that I and the orchestra have enjoyed very much. We’re looking forward to the performance!” — Gary Lewis, Director of Orchestral Studies, University of Colorado-Boulder